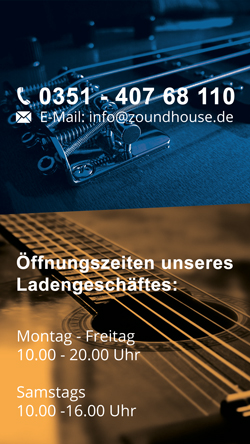 Teilen Tweet Email Teilen
Beschreibung Bewertungen 0
Beschreibung
- Big Muff Knob Layout # Sustain, Tone and Volume   - Crossover Filtering # further... mehr
Menü schließen
Produktinformationen "Deluxe Bass Big Muff Pi"
- Big Muff Knob Layout # Sustain, Tone and Volume
- Crossover Filtering # further sculpt your distorted and dry tones
- Gate # remove unwanted hum
- Input Pad # accommodate active pickups
- Blend # control the mix between effect and dry signals
- DI Output # connect directly to mixing consoles and recording equipment
- Volume # obtain just the right balance between bypass and effect
- Buffered Bypass # high quality buffer with extended low frequency response
- Direct Output # outputs your buffered dry signal for secondary signal chain
The Deluxe Bass Big Muff draws its roots from the legendary Sovtek battle-tank green Big Muff
Pi from the late #90s as well as from the original Electro-Harmonix Big Muff Pi from the early
#70s. The Deluxe Bass Big Muff takes the best elements from both of these classics, employs
sonic elements that were specifically designed for your bass and gives you even more toneshaping
options than ever before.
CONTROLS
VOLUME # Works as a master volume for the entire pedal and is capable of boosting the input
signal by 14dB above unity gain.
BLEND # This mixes between the dry and distorted signals. Turn this knob fully
counterclockwise for 100% dry signal and fully clockwise for 100% wet signal. Setting the
BLEND knob to noon yields a 50/50 mix of dry/distorted signal.
TONE # Provides a range of sounds from high treble to deep bass on the distorted effect only.
The overall tone filter frequencies were carefully chosen to enhance your bass guitar. As you
turn the TONE knob clockwise the treble response of the Big Muff distortion increases.
SUSTAIN # As in the original Big Muff Pi, adjusts the amount of sustain and distortion.
GATE # Controls the input amplitude needed to open the noise gate. As you turn the GATE
knob clockwise, the amount of gating increases, requiring a louder signal to open the gate and
allow your instrument to pass through. Turning the GATE knob down all the way disables the
noise gate function.
HPF # When CROSSOVER is engaged, the signal just prior to entering the distortion circuit is
sent through a second-order high pass filter. The HPF knob adjusts the cutoff frequency range
of the high pass filter from 125Hz to 1.75kHz, with the frequency increasing as the knob is
turned clockwise.
LPF # When CROSSOVER is engaged the dry signal is sent through a second-order low pass
filter. The LPF knob adjusts the cutoff frequency range of the low pass filter from 60Hz to
10kHz, with the frequency increasing as the knob is turned clockwise.
INPUT # This toggle switch engages 10dB of attenuation on the input to make the Deluxe Bass
Big Muff friendlier to basses with active pickups.
BYPASS FOOTSWITCH # Toggles between effect mode and a high quality buffered bypass.
When the red status LED is lit, the effect is active. When the LED is off, the Deluxe Bass Big
Muff Pi is in bypass mode.
CROSSOVER FOOTSWITCH # Turns the crossover circuit on and off. When the green status
LED is lit, the crossover circuit is active and the HPF and LPF knobs can be used to produce a
multitude of different tones.
I/O AND POWER CONNECTIONS
INPUT # Musical instrument input. Plug your instrument into here. The input impedance
presented at this jack is approximately 2M?.
OUTPUT # This is the main output of the Deluxe Bass Big Muff Pi. Connect it to the input of
your amp or another effects pedal.
DIRECT OUT # This is a buffered output of the original bass signal. You can connect this jack
to an amplifier or different effects chain.
DI OUTPUT # Low impedance output capable of driving 600? so that you can plug directly into
a mixing console and recording equipment. This output#s signal is the same as that of the
OUTPUT jack.
9V POWER # The Deluxe Bass Big Muff Pi can run off of a 9V battery or you can use a 9VDC
battery eliminator capable of delivering at least 100mA to the 9V power jack. The optional 9V
power supply from Electro-Harmonix is 9.6DC-200BI (same as used by Boss© & Ibanez©) 9.6
Volts DC 200mA. The battery eliminator must have a barrel connector with center negative.
The battery may be left in or taken out when using an eliminator.
OPERATION AND WARNINGS
To change the 9-volt battery, you must remove the 4 screws on the bottom of the Deluxe Bass
Big Muff Pi. Once the screws are removed, you can take off the bottom plate and change the
battery. Please do not touch the circuit board while the bottom plate is off or you risk damaging
a component.
To achieve its long sustain, the Deluxe Bass Big Muff Pi has very high maximum gain. This
requires that pickups and cables be well shielded and properly grounded to avoid excessive hum when high sustain knob settings are used.
Weiterführende Links "Deluxe Bass Big Muff Pi"
Bewertungen 0
Bewertungen lesen, schreiben und diskutieren... mehr
Menü schließen
Kundenbewertungen für "Deluxe Bass Big Muff Pi"
Bewertung schreiben
Bewertungen werden nach Überprüfung freigeschaltet.
Weitere Artikel von +++ Electro-Harmonix +++ ansehen 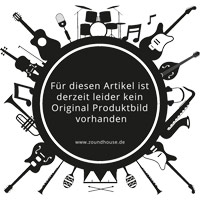